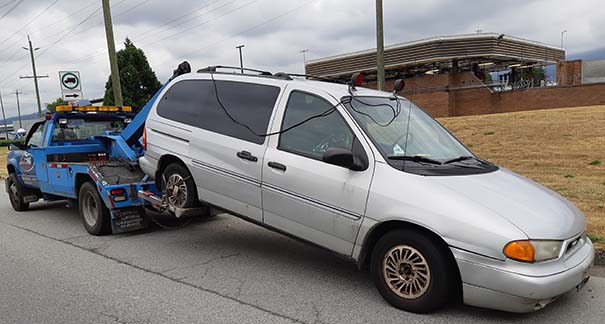 Here is a photo of Joe in his truck towing away a Ford Windstar in Coquitlam very recently. The reason for this junk car removal job was oxidation. Rust had gotten the best of this 1998 model Windstar GL. It had a 3.8 L engine, but was no longer driveable.

The good news is that the former owner of this silver coloured minivan ended up with hundreds of dollars as a cash payment from Vancouver Scrap Car Removal. We are not sure whether they phoned and asked for competitive quotes for free junk car towing, or cash for cars from any of Joe’s competitors in the greater Vancouver scrap automotive recycling business before they ultimately decided that Joe was the man they wanted to use or not. But what we can be very confident of knowing is that if they had, they probably picked Joe instead because – as so many of his five-star reviews attest – Joe is just a really nice guy to do business with.

It’s fast and easy for you to get paid top dollar when you want to have your scrap auto towed away. Whether it’s a mini-van like this Ford Windstar, or any other car, truck or RV. All you need to do is…

Talk to Joe, tell him about your vehicle, and set up a convenient time and place for him to come and meet you. 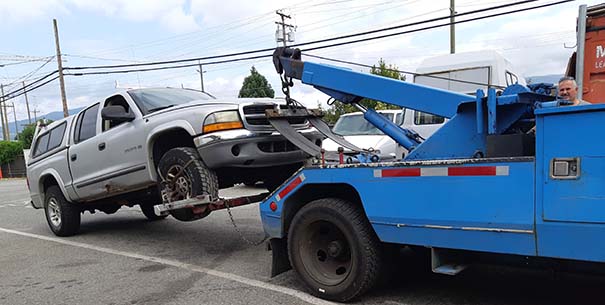 It’s no wonder why the owner of this 2002 Dodge Dakota in Port Coquitlam decided it was ready to be turned into cash for cars. First of all, the truck had been driven a very high number of kilometers. To make it worse, its side windows had been smashed. But the most important deciding factor was that its transmission had blown. So the PoCo Dakota driver did the smart thing. They picked up the phone, called Joe at 604-779-6397, and in very short order they had hundreds of cash dollars in their hand, and no longer had an old, unwanted truck to worry about. 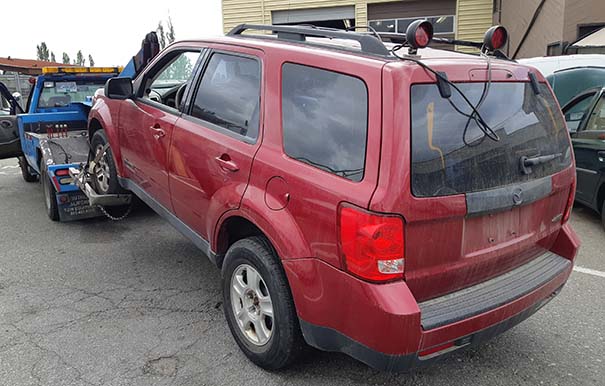 Another vehicle in Port Coquitlam that Joe recently recycled was this red 2009 Mazda Tribute. Maybe its Engine Oil Pressure Warning Light had burned out, or perhaps the owner simply didn’t notice that the indicator was showing that the oil in the crankcase needed to be re-filled. For whatever reason, this compact crossover SUV was driver without any oil in the engine. Until it stopped running because the engine had frozen up.

It was only after the engine had been wrecked that the owner did the smart thing and contacted Vancouver Scrap Car Removal.

Of course Joe was helpful. He responded promptly the call at at 604-779-6397. He had a short conversation about what the vehicle was, why the owner was ready to have it towed away, as well as the location and time for a meet-up.

When the dust had settled, Joe was driving away with the SUV secured to the back of his tow truck, and the former Tribute owner was now wondering what they were going to do with the hundreds of dollars in fast cash that they received, at the conclusion of this “Cash For Cars” adventure.

Send Joe a Text For a Free Quote